Hans Feurer, iconic Swiss photographer, is a mainstay of fashion photography since the late 1960s.
Since the start of his great career, he has produced thousands of images and entered into the realm of one of the most legendary photographers of our time.
He continues to travel the world producing captivating and strikingly recognizable images as memorable as his Pirelli calendar in 1974 and his Kenzo campaign in 1983 that immortalized the model Iman.
In his career, Feurer has created thousands of photographs, from the famed images of Swinging London produced for the magazine NOVA in the 1960s, all the way to the numerous collaborations with some of the most important fashion magazines like VOGUE, NUM`ERO, ID and Another with whom he continues to collaborate to this day. In 2015 his first monographic book was published by Damiani Editore with creative direction by Fabien Baron.
A perfectionist, aesthetically attracted to models that exude a sensual and aggressive fascination, he creates imagery that emphasizes beauty and movement, a dynamism at once both biting and delicate. Critics consider him to be one of the greatest fashion photographers in Europe. 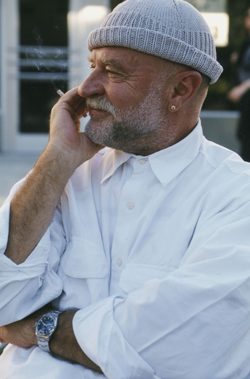