Eric Maillet (1957 Dieppe, a town in Upper Normandy – 2021 Paris)
He was an internationally renowned photographer who worked for the most important luxury brands and stood out for the originality, beauty and delicacy of the themes on which he focused his personal projects. He spends his youth in Normandy, near the sea, starting very early to observe with interest nature, the beauty and the magic of light, themes that will become the focus of his work as a photographer. In 1980 he moved to Paris and started working as an assistant to a still life photographer and three years later he opened his first studio. Over the years his style is influenced by the work of Brodovitch and Rodchenko: revealing the beauty, fragility and generosity of nature through photographic images becomes his leitmotif, developing a particular interest in water, which in the eyes of Maillet is the perfect muse. During his career he has created the advertising campaigns of the most renowned fashion houses such as Cartier, Dior, Lancôme, Yves Saint Laurent, Giorgio Armani, Roberto Cavalli, Salvatore Ferragamo, Fendi, just to name a few, and of important fashion magazines such as Numéro, Vogue France, Vogue China, Mixt (e), Vogue Gioiello, Glamor Italia and many others. He exhibits in Italy and abroad in some of the most prestigious contexts dedicated to author photography, such as the Paris Photo at the Grand Palais in Paris in 2015 and in the same year at the Palazzo Pirelli Exhibition Center. 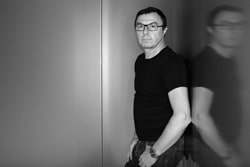